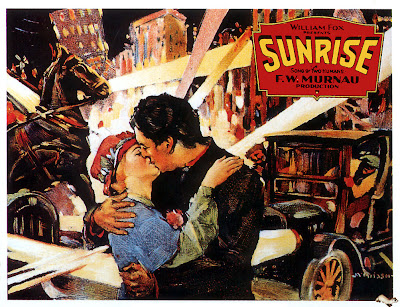 1927's Sunrise: A Song of Two Humans has the distinction of being the only film in the history of the Academy Awards to receive an Oscar in the category of “Most unique and Artistic Picture.” It is a film quite deserving of that appellation – it is a film that emphasizes atmosphere and theme over plot and characterization. This is not to say that the narrative – or indeed the film as a whole is incoherent or disjointed, only that the film relies on the bare essentials of storytelling to get its point across. The settings and characters remain anonymous, and the themes which the film discusses are hardly groundbreaking. Indeed, Sunrise feels like nothing so much as a fairy tale set to celluloid. It is a rather unorthodox approach, but thanks to the excellent direction and cinematography of Friedrich Wilhelm Murnau – most famous for directing the 1922 German film Nosferatu – it is quite effective.

As the film begins, we learn that a Man (George O'Brien) and his Wife (Janet Gaynor) have become increasingly estranged from one another. The reason for their marital troubles is a Woman from the City (Margaret Livingston), with whom the Man has been carrying on a less-than-covert affair. During one of their moonlit liaisons, the Woman asks the Man to return to leave his homestead behind and go with her to delight in the pleasures of decadent city life. As for his wife, the Woman suggests that she be removed from the picture by an unfortunate “accident.” Unable to resist the Woman's seductive temptations, the Man agrees to go through with the plan.

For several reasons, this decidedly Faustian sequence is one of the most fascinating in the film. First off, we are treated to an impressive montage of the sights and sounds of the City – the music, the booze, the dancing and the rest of the hustle and bustle. In a film where dialogue is absent and intertitles are few and far between, such striking effects are a huge positive (for what it's worth, even the intertitles are visually distinctive in this film). Secondly, Margaret Livingston is perfectly cast as the sultry temptress – she is dark and alluring, and at the same time vivacious and full of sex appeal. A rather convincing portrayal, to say the very least.

The next day, the Man offers to take his wife on a boatride, an offer which the Wife accepts, blissfully unaware of his nefarious intentions. Once the boat is sufficiently far from shore, the Man rises and, looming monstrously over his cowering wife, prepares to throw her overboard. Thankfully, the Man realizes that he cannot bring himself to carry out the deed and relents, rowing feverishly for the opposite shore. Understandably, the Wife flees for her life as soon as the boat reaches dry land. The Man follows her, begging her forgiveness. They ultimately wind up in a chapel where, as fate would have it, a wedding ceremony is taking place. So moving is this ceremony – reminding them, perhaps, of their own wedding – that the Wife is able to forgive her husband for the crime he nearly committed, and the two leave the chapel with a newfound appreciation for one another.

Several reviewers take issue with this scene, specifically, the speed with which the Wife forgives the Man for very nearly attempting to kill her (for more on that, see Chris Edwards' review at Silent Volume). It's an objection I find hard to dispute. This is no mere argument over the dinner table; an attempted murder is hardly the sort of incident one can easily sweep under the rug. The Wife would be perfectly justified in making for the nearest courthouse and filing for divorce and a restraining order. That the Man and the Wife are so quickly reconciled seems more than a little improbable. Far-fetched though it may be, however, it is not entirely outside the realm of possibility. The Wife, by every indication, is a simple peasant woman -- her home, her child and her husband likely constitute her entire world. Without these pillars, that world would come apart at the seams. For her, it is better to have a husband and run the risk of running afoul of his violent temper than not to have one -- think, for example, of the battered women who, for reasons that make sense only to them, refuse to leave their abusive husbands. Attempted murder is obviously more grave than garden-variety domestic violence by several orders of magnitude, but it is quite possible that such a mindset is at work here.

A simpler way of getting around this problem, however, might be to consider that, at least in the context of this film, reading too deeply into characterization (as I just spent the last paragraph doing) is perhaps counterproductive. This film presents us not so much with fully fleshed-out characters as with representitives of types. Much like the figures in a fairy tale by the Brothers Grimm, one gets the impression that one need not understand why a character does what he or she does, but only that he or she does (does anyone question why, for example, Jack is gullible enough to exchange the family cow for a few magic beans, or why Goldilocks has no qualms about sneaking into a house while its occupants are out?). This approach would more than likely fail in a talking picture or a stage production, as those are heavily dependent on on characterization and dialogue to communicate. In a silent film, however, the means of communication is almost entirely visual, so this approach to storytelling manages to be effective.

The scenes which follow the reconciliation -- however improbable it might be -- mark a significant shift in tone from the earlier portion of the film. Whereas the buildup to the near-killing feels dark and increasingly suspenseful, the film takes on a much lighter aura in the wake of the cathartic scene in the chapel -- it's as though the audience is privy to the Man and Wife newfound happiness. The Man and Wife eventually arrive at an amusement park, where they cavort like a young couple on their first date (indeed, their first date might well have been here). The scenes in the amusement park are perhaps the most visually appealing in the film -- F.W. Murnau's expressionist pedigree manifests itself in the art direction here, as the amusement park looks like an amalgamation of Asbury Park and The Cabinet of Dr. Caligari.

Having had a delightful evening, the Man and Wife return to their boat and set out for home. A fierce storm kicks up, however, and the boat is capsized by turbulent waters. The Man is able to reach the safety of dry land, but the Wife is nowhere to be found -- a search party is organized, but to no avial. Devastated, the Man returns to his house. Meanwhile the Woman from the city, noticing all the commotion, assumes that the Man has carried out her plan and goes to him under cover of darkness. She does not, however, receive the loving welcome she was expecting: ostensibly blaming her for his wife's death, the Man seizes the Woman by the throat, intent on choking the life out of her. The Woman is saved, however, when an old maid calls out for the man -- the Wife has been found, and is still alive. As the sun rises over the village, the Man and the Wife are joyously reunited, and the Woman from the city makes her exit, sulking on the back of a horse-cart.

Although it isn't without its shortcomings in the plot department, Sunrise is a fantastic movie in just about every other respect. The film is beautifully shot, the performances are solid all around and F.W. Murnau manages to cover a lot of emotional ground without it ever feeling too forced. The film was widely acclaimed by critics at the time of its premiere, but audiences were rather less enthusiastic -- in spite of its unique recognition as an artistic success, Sunries was not a hit at the box office. Fortunately for us, a copy of the film has survived in surprisingly good condition, and was added to the National Film Registry in 1989. Sunrise airs on TCM occasionally, and is also available on DVD. However you see it, Sunrise is an extremely worthwhile investment, and is, at least in my estimation, one the best pictures from the silent era.

Feta
Kansas City, United States
Your humble narrator is former college student living in exile. I hope to someday escape and become an eccentric artist, not unlike Sander Cohen.